Today I had a visit from a very small dragonfly.  I’m sure there is a scientific name for the stage it was in, but I referred to it as a baby dragonfly.  The whole encounter brought a sense of 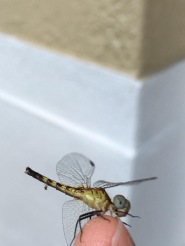 comfort to me for many reasons, not the least of which is a grief story told to my brother’s and my young children when our father passed.

I cannot truly do justice to the story, although I will try.  But I encourage you to read one version of it here.  As the story goes, a group of insects lived under the surface of the water and occasionally, one would climb a stem and exit the water, never to be seen from again.  Those who lived beneath the water wondered what happened to those who left, and wondered why the leavers never returned to tell them of their trip.  One day, one of the insects got a sudden urge to climb a stem and see what was there.  The trip was tiring and he laid down on a lily pad to rest, but when he awoke, he has transformed into a dragonfly, wings and all.

The allegory of the tale likened the world below the water to be Earth, while that above was Heaven.  Our children were encouraged to believe that their grandfather had grown wings and one day, when it was their turn, they, too, would get the opportunity to earn their wings.  It was a simple tale they could grasp that symbolized the differing worlds and transformation, and this particular counselor told the story and then allowed them to each make their own dragonfly from beads and pipe cleaners.  From that time forward, I always thought of dragonflies as the souls of those who had passed.

That may have been the beginning of the fascination I developed with dragonflies, but it was certainly not the most intriguing.  My husband and I moved to our community in the Summer of 2012 and we began to take frequent walks, which became progressively longer both in time and distance.  Eventually, these walks developed into nature photography sessions, where I would become entranced with one subject or another, but often my subjects were insects.

You must understand that I took these photos with a cell phone, not having a real camera at the time, and although many of the pictures were nearly macro-photos of bugs, they were taken within inches of them.  It was necessary to get up close and personal with spiders, bees, butterflies and more and I became known as the bug lady among my friends.

Sometime last year, I began to have encounters with dragonflies.  It began one afternoon with a swarm of a dozen or so in a cow pasture that dipped and swirled about me.  They would not land for very long and I was unable to get any pictures, although the experience itself was magical.  The next afternoon, as we exited a path through the woods, several began to dance around me again and then one landed on my chest.  I asked my husband to take a picture because I was having difficulty, so he took my phone and took several photos as the dragonfly moved from chest to shoulder to hand to leg.  He stayed with me for awhile as I spoke softly to him.

Over the next several weeks and months, the encounters became more and more frequent.  That Spring when the blackberries came in, A and I would go blackberry picking and these trips would inevitably become him picking berries and me talking to dragonflies who seemingly came to sit on the branches where I was attempting to pick berries.  It was almost as if they were seeking me out.  They would land on a branch near me and wait for me to notice.  It got to the point where I began saying, “OK. OK.  Let me get out my phone.  Hold on…” while I dug through my backpack to begin their private “photo session”.

If you’ve never really taken the time to look at a dragonfly, they come in many colors, and I had been having difficulty with a pretty green-striped species who refused to stay put long enough for me to get any pictures.  One evening on our walk, my husband discovered

one of the green ones beneath a blackberry bush and it seemed to be struggling and unable to fly.  He brought it to me where I sat it on my hand and then my knee, taking photos and attempting to revive if if I could, but I was unsuccessful.  The entire time I spoke to the dying dragonfly, another green one darted around nearby as if sensing I was there to help.  When it was clear there wasn’t much else I could do, my husband and I found a cool, quiet spot where the dragonfly wasn’t in danger of being stepped on by anyone who might happen by.  It was as if the dragonfly that had been watching returned to his little green friends that night and let them know that we were the good guys, because after that I never had trouble getting a green one to land again.

Later still, came the dragonfly smiles.  Seriously.  I came across a brown and blue dragonfly that would rest upon a branch at eye level and turn his head sideways while I spoke, almost as if he were taking in what I was saying (which generally was nonsense).  Then, he smiled at me and I caught the picture!  That one photo led to my subsequent obsession of having it happen again, which it did.  Several times.  But the culmination of my dragonfly phase was the day I was able to film my encounter with a dragonfly one afternoon and capture the smile on camera.  The speed at which it happens is incredible to see in motion when you realize that I was able to capture that moment with a cell phone on more than one occasion.

I believe my visitor this afternoon was quite possibly my husband coming to say hello.  He is still a fairly new soul, which is why it was a baby dragonfly, but its willingness to sit on my finger, allow me to put it down, and then have it waiting by my garage door upon my return to hold it again pretty much made it clear to me.  He knew I would understand the message. 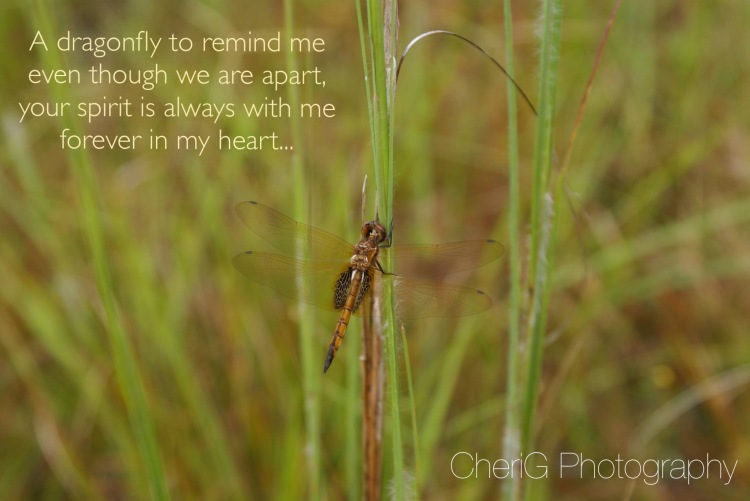 All in all, today was a positive day, and I’m looking forward to more of these.  My goal is not to simply “get well”, although it would be nice to not be so sad and angry so much of the time, but to truly get better.  I want to transform and use my pain to make me a better person, so one day I’ll have my opportunity to become a dragonfly.