My husband was a rather private man.  Despite being charming and well-liked by most people, he was still quite an enigma.  A recent conversation with my cousin (yes, that one, the one who dropped everything to rush more than 1,000 miles away to ensure I was OK when A was hospitalized) made me realize how little people actually knew the real A.

It wasn’t that he was secretive so much as he just kept to himself (or to ourselves, I suppose).  Our little family, the five of us, have been always been a close-knit unit, sometimes too close, if truth be told, and we sometimes have had our wagons circled so closely around ourselves for protection that we don’t always let others in.  This is a self-preservation technique utilized to prevent being taken advantage of, often by family.

You see, it wasn’t that he was necessarily different in public, but rather that he only presented a somewhat superficial version of himself.  He didn’t let people in very easily, and certainly not to any depth.  In any event, there were many things about my husband that people outside of our tight circle never knew.   Getting others to understand who he was, is not going to be accomplished in one blog post, so I’m going to try to focus on one aspect of the real A across several posts.  By the end of what I anticipate to be a short series, perhaps you’ll have just a peek into the kind of man he was, and what drove him (aside from his love for his family, which I think I’ve covered more than any other topic these past few months).

Most people who knew him definitely understood his passion for sports – all sports.  As a child, it began with baseball, and he would spend hours out behind his house batting rocks with a piece of copper piping borrowed from his father’s work supplies.  He told of how he would be out there hitting stone after stone after stone, until his mother would eventually throw open her window and tell him to “Knock it off!” because she was trying to nap.

He was a talented little player, but frustrated at the politics of Little League, even at such a young age.  Despite being on the All-Star team, he didn’t get to play as much as he would have liked, simply because he was not part of the inside circle.  As a pitcher, he had been competition for the coach’s own son and was often brought in only to save an inning and then benched again.  He recalls one particular umpire approaching him after one such All-Star game and telling him what a “shame” it was that he wasn’t getting to play more.  The man had seen A’s talent, and I’m sure his dejection had showed on his little face.  Years later, that same coach would apologize to my adult husband saying he was “real sorry” for how he had treated A.  The coach regretted holding him back, and his apology did a great deal for my husband’s spirits, even 20-25 years later.

As a teenager and young adult, he was somewhat obsessed with basketball.  He fashioned his own “hoop” from an old barrel and piece of plywood to practice shots with in his basement garage during the Winter months.  He would take his basketball to bed, and lying on his back, toss the ball in the air and catch it, practicing passes.  When he got older, he would walk more than 2 miles to the local high school, only to play for hours, either alone or with whomever might be there, until it got too dark to see the backboard at which time he would walk home again.

When we started dating, I would spend endless amounts of time sitting court side watching him.  He was not only driven, but he was talented, and he had once been asked to play for a traveling church league.  His parents didn’t allow him to join, however, much to his disappointment.

As good as he was in basketball, though, he played football in high school, following in his older brother’s footsteps.  It was probably his least favorite sport to play, and he always regretted the injuries he received, which created lifelong complications.  He once hurt his neck during a play in practice and was essentially unable to move very well for several days.  He told us that he struggled to even get on the school bus and his sister had to help him up the steps until he had mended.  It would occasionally give him trouble, however, causing tingling and numbness in his wrist and hands.  During one of the MRIs he received when he was in the hospital, they discovered the “old damage” to the spinal cord in his neck which had since healed.

He gave his all as both an offensive guard and outside linebacker, no matter what, and at the close of his senior year was presented with an award named for the former Athletic Director of the high school and given to an athlete that exemplified the tireless and compassionate nature of its namesake.

Through the years, he not only suffered the above-mentioned injury, but also a broken arm playing basketball in a men’s league when an opponent took his legs out from under him while he went up for a layup.  That was one of the few games I ever missed because I was doing last minute preparations on our wedding which was about a month away.  When his friend brought A back to his apartment where I had been discussing plans with T’s wife, T told me that it was probably broken and an ER visit was in order.  On the way to the hospital, A insisted that it was just a sprain, despite the fact that it was resting on a borrowed pillow in the shape of a Z.

Turns out, he had landed on his right arm, causing a break in both bones in the lower arm, and the treatment involved suspending his fingers from a contraption hanging from the ceiling and yanking the bones apart before they could be reconnected properly and then encased in a cast.  (This was the ER visit where the nurse exclaimed something to the effect of “My!  What big BONES you have!” much to the delight of my husband’s ego.)

He had me remove the cast a few days before our wedding, which was a few weeks too early, but he refused to go on our honeymoon to Hawaii inhibited or restricted in any way.  Utilizing a small hacksaw and a pair of needle nose pliers and working together, we eventually got it off and his arm seemed slightly withered and pale, but otherwise in good shape.  (The only problem he ever had with it afterwards was during the receiving line of our wedding when an overly zealous husband of a friend of mine gripped him by the right elbow and vigorously shook his hand, causing A to turn white and my friend to reprimand her extremely apologetic husband.)

He also fractured his left leg a few years later when he and a softball teammate ran full speed into one another to catch a fly ball that was landing between the two.  Neither one ever slowed down and we could hear the impact from the stands.  He refused to make another trip to the Emergency Room that night and spent the next twelve days not only walking around on it, but also lugging freon tanks and tool boxes up and down ladders.  I finally convinced him that having his knee swollen to the size of a cantaloupe wasn’t normal; turns out, he had sustained a short, lengthwise crack in his tibia behind his knee and the orthopedic doctor told him he had likely been days away from causing enough damage to require a pin to repair it.  Again, his “very big bones” prevented a much worse injury.

As it was, he was put in a cast from mid-thigh to ankle for the next 8 weeks, and spent that time trying to chase around our then 1 y.o. daughter (and relishing every minute).  Again, he had no long term issues from the event, although there was that one time he liked to bring up on occasion where I sat on the edge of the bed to put my shoes on and didn’t realize his foot was under the blanket where I perched.  To hear him tell the story, I caused him to stand straight up in bed like a cartoon.  It probably seemed that way, but in actuality, it was more truthful that I hyper-extended his foot which, I’m sure, was rather painful. 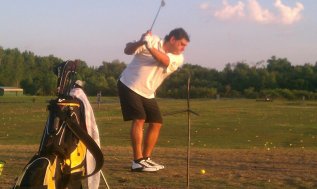 A few years before we got married, he took up golf and eventually found his true passion.  He immediately took to the game, thoroughly enjoying the idea that there were no teammates, there was no clock, there was simply man versus course.  If one is to succeed in golf, it must be done on one’s own merit.  That’s it.  There are no teammates to congratulate or to blame.  There is no one to carry a player who isn’t doing well that day.  There is no one to aid an injured colleague.

It became his dream to one day play professionally on a tour, and we had decided shortly before he passed that maybe this would be “his year”.  He had just turned 50 and could qualify for the Champions Tour.   Even with store bought equipment, clubs that were not made specifically for his long arms and fast, powerful drive, he could pummel the ball straight down the middle of the fairway.  Through the years, he had honed his short game, as well, and had only recently discovered that elusive grip that made all the difference in his putting.

Every time I think of how close he had come, yet still fallen short, not because of lack of skill, but lack of opportunity, it crushes me.  To know that he had such raw talent that went to waste is tragic.  At the same time, it comforts me that he tried.  He did not allow the sheer improbability of success stop him.  He had a dream and he went for it, with our blessing, and we can be content in the knowledge that we didn’t hold him back.