I’ve spoken on more than one occasion of the importance of music in my relationship with my late husband.  It was an integral part of our family life, and the value and meaning of certain songs and lyrics haven’t stopped simply because he’s not physically here to share the moments with me.

There are times when I’ll hear a new song, or finally, actually hear the lyrics of a song I’ve known forever, and the tears will flow because I truly believe A is communicating with me in a way that is certain to get my attention.  This morning was one of those occasions.

My commute was spent almost entirely in tears, mostly the steady, silent ones that seem to come out of nowhere and simply fall endlessly.  (To be honest, I prefer these to the ugly, sobbing cries that make driving a bit difficult…)  It started, strangely enough, with Dionne Warwick’s “I’ll Never Love This Way Again“, not because I’d had any previous attachment to (or affinity for) it, but it struck me as exactly how I’ve been feeling lately.  I’m caught somewhere between feeling that I’m too young to be alone for the rest of my life and feeling that one person can’t possibly be selfish (or lucky) enough to have more than one great love in their life.

Right after that song and those thoughts, I switched stations to find Tesla’s Love Song starting, as a hawk swooped over the top of my car to land in a nearby tree, almost as if challenging me.  If you’ve never heard it, the entire song talks about how love is all around and if you stay open to it, it will find you.  But the lyrics that truly struck a chord this morning were these: “Don’t you even worry, pretty darlin’.  I know you’ll find love again.”

There was a series of other songs that each seemed to be meaningful in its own way, but I don’t remember them all.  But when You and Me by Lifehouse came on, I came undone.  That song is especially significant as it’s one that I chose to play at his Celebration of Life with pictures of the two of us.  The line in the song that says “I don’t know why, I can’t keep my eyes off of you” always caused him to say that was how he felt about me. A would often tell me that no matter where I was, or how long we had been together, he just couldn’t stop staring.  He saw past my (many) flaws and could only see beauty. 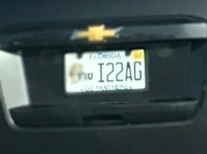 Now, while just hearing the song alone would be enough to tug at my heart strings, A had to make it absolutely clear that he was speaking to me.  He wanted there to be no doubt, so I was suddenly passed by a vehicle with the license plate “I22AG”.  Just think about the odds of that for a moment, AG are his initials, 22 is “our number” and the I was him letting me know it was definitely his message.

All of this comes on the heels of a day spent absolutely surrounded by birds outside my office window, including a gorgeous red-shouldered hawk and several cardinals, male and female.  The cardinals have been hanging around for awhile now both at home and office,  and I often wake to their distinct laser-like chirp outside my bedroom window.

fanatic, I do), cardinals are “monogamous birds whose relationships with their spouses are harmonious, romantic and musical.”  If a cardinal crosses your path, you will either find love if you’re single, or find renewed romance with your significant other.  Others believe cardinals are lost loved ones coming to visit.  Either way, I took it as a positive sign.

My subconscious mind must have thought so, too, because last night I dreamed of a fat, little cardinal wearing a sweater (I know, right?  I don’t understand the sweater, either, but I believe it may have had a letter on it… W, maybe??).  He flew up to me and landed on my hand while I was with a group of people.  Although I don’t remember exactly who was there, or even where we were, I remember calling out to someone to “get your camera and take a picture of this!”  As s/he did so, I spoke to the the bird, speaking the affectionate nonsense saved for babies and animals, and he actually nuzzled up to my face, rubbing beak to nose.

Then, for some reason, we realized the bird had his own camera filled with pictures of all the places he had been and the adventures he’d been on.  I don’t remember all the details, but there were photographs of the bird on a few roller coasters.  It seems he had been having quite a bit of fun and was in a good place.

Despite the tears, I’m hopeful and feeling positive today.  I took all of these to be signs from A.  It was if he wanted me to know that he loves me and always will, but that he was happy and healthy (and had a cool sweater to boot).  And that love is all around me…

One thought on “Cardinal Song”