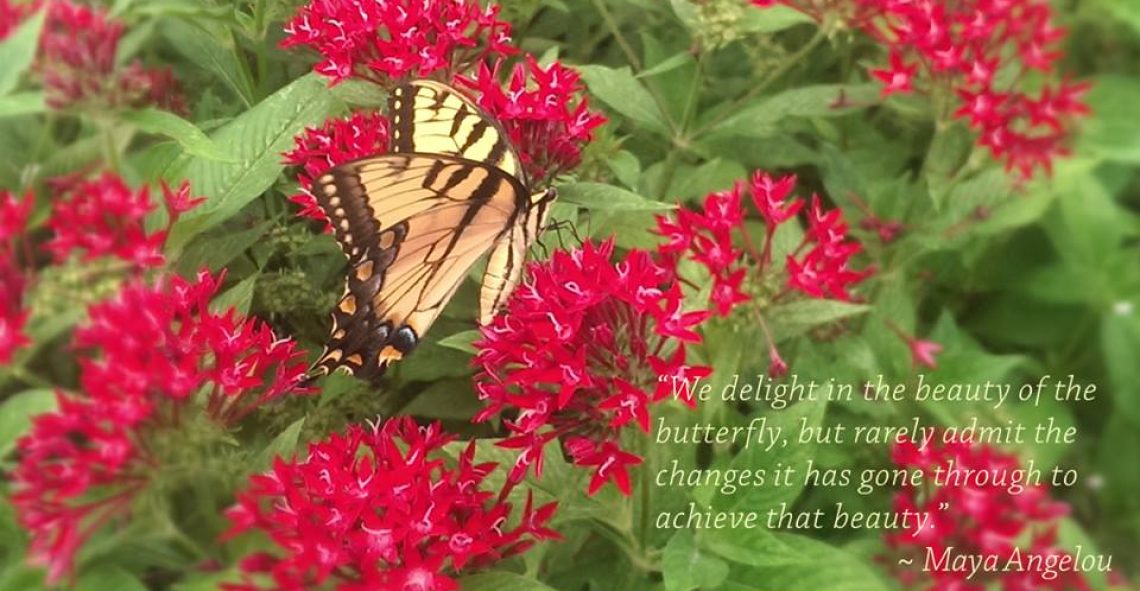 When A died, I poured my heart out through my grief journey.  Every step and misstep was documented with the dual purpose of keeping my far flung friends and family informed of my progress, and letting out my emotions to work through them.  Each emotion was felt, analyzed, discussed, and accepted.

It is now more than 4 years later and I have found love again, and I am still feeling, analyzing, and discussing my feelings on a smaller scale.  But acceptance eludes me to some degree with certain emotions.  Most recently, I’ve found that I am often resentful.

There are some definite long-term effects of grief – some positive, others not so much.  I try to make sure those I love know that I love them.  I say it often, probably to the point of overwhelmment for the recipient (not a word, I know, but somehow I think it accurately portrays my meaning).  I try to live in the moment and find enjoyment where I can.  Life’s little annoyances have less of an effect on me past the hour of irritation, while life’s little moments can seem brighter and more meaningful.

However, I also find myself to be fearful of abandonment, and sometimes have an irrational belief I am not supposed to be happy.  That it is my destiny to suffer.  And I wonder if this is a long term effect of grief, or a by-product of never quite feeling “enough”.  I’ve spoken of this before, the feeling of being “less than“.

And I’ve found myself to be resentful lately, even as I acknowledge and celebrate other people’s joys and accomplishments – the couple celebrating 30 years together, the young people getting married and starting their lives together, those who have become successful and have careers they love and get to spend time with their grandchildren – it all agitates me at times, and I find myself bitter and discontent.  And even as I acknowledge feeling that way, I understand it is baseless and unfair, especially to those who have done nothing wrong aside from enjoying their lives and living them to the fullest.

And so I try to work towards acceptance. Because I’m certain this resentment is merely another layer of emotion in my grief journey.  It is likely normal that I am angry other people are celebrating a marital milestone it’s unlikely I’ll ever see.  I’m sure I’m not the first person to feel more than a twinge of bitterness over someone seemingly living the life I thought I was meant for.  And I know that I’m not the only woman on the planet who hates seeing another woman who is younger, prettier, and more fit than she is.  Especially when coupled with the knowledge that I really only have control over one of the three – I can never be younger or prettier.  I can only be thinner.  But that takes effort.  And dedication.  And I think my weight often provides a physical layer of the emotional protection I need.

I recently came across a paragraph in a book that struck me.  (I haven’t yet finished the book, Big Girl Panties by Stephanie Evanovich, so I can’t give a definitive review yet, but my first impressions are “wow… I so relate!”)  The main character, an overweight widow (any wonder why it’s relatable?), hires a personal trainer (and that is where it loses me…) who is talking to her about why a person overeats.  He tells her that telling an overeater to have some willpower is “just as damaging to their self-esteem as telling an anorexic to just eat.” 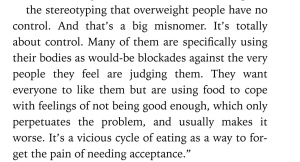 He goes on to say that the stereotype of overweight people lacking self control is “a big misnomer.  It’s totally about control. Many of them are specifically using their bodies as would-be blockades against the very people they feel are judging them.  They want everyone to like them but are using food to cope with feelings of not being good enough, which only perpetuates the problem, and usually makes it worse.  It’s a vicious cycle of eating as a way to forget the pain of needing acceptance.”

Years ago, I talked to A at length about my weight and being misjudged.  My personal theory is that I feel as though people misjudge me and dislike me and I always wondered why.  I’ve tried to be helpful and kind and when other people still disapprove of me, it hurts.  And so I think I have built up a physical “reason” for them to dislike me – people have this general condemnation of overweight individuals and see it as a character flaw.  So essentially I give them a reason not to like me.  My fat is the justification, because this is easier to accept. And then I resent them for disliking me. 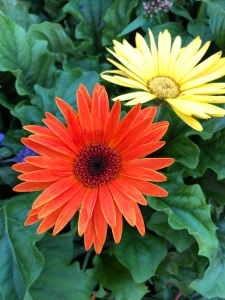 My weight should not define me, nor should I care what others think as long as it isn’t affecting my health (it isn’t).  But I’d be lying if I said it doesn’t bother me when people judge me solely on the basis of a number on a scale (it does).

I know that resentment and bitterness hurt only me, and I’m the one who needs to work through them.  I know this intellectually, but my emotional side likes to hold onto the hurt because it’s “easier” than self-improvement. There is pain and effort in growth and maturation, but the blossoms in the end will be totally worth it.

2 thoughts on “Heavy with Resentment”